My new publication series of historical arrangements for brass by women and minority composers debuted this summer.  My first installment is Three Medieval Songs, for solo tuba or euphonium, featuring two works by Hildegard von Bingen and one by Beatriz, Comtessa de Dia. This music can be heard on both of my solo albums, O quam mirabilisand Zigzags.

These examples of Medieval song and monophonic chant would have originally been composed without bar-lines or detailed rhythmic notation. They would have been learned by rote and sung by the nuns at the convents, or the troubadours on the road, perhaps with the addition of a second harmonic line, a bass drone, or instrumental accompaniment, which would have been improvised. The performer today should feel free to choose rhythms and tempos which suit you, and add dynamics as you see fit. 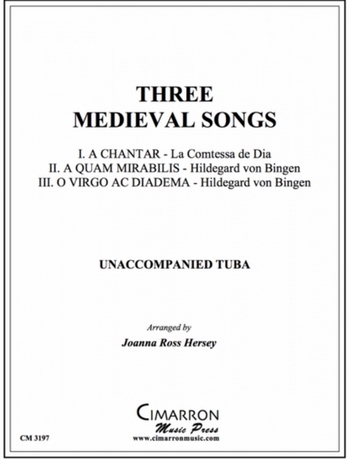