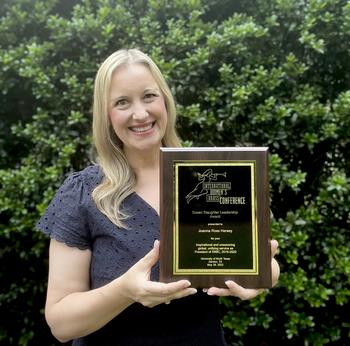 Dr. Joanna Hersey, associate dean of Student Success and Curriculum for the College of Arts and Sciences at UNC Pembroke, was presented with the Susan Slaughter Award for Leadership at the 2022 International Women’s Brass Conference held at the University of North Texas in Denton, Texas.

Hersey, a professor of Music, joined the faculty at UNCP after serving as principal tubist with the United States Coast Guard Band. The International Women’s Brass Conference (IWBC) was founded with a mission to showcase the diversity and belonging in brass performance to help counteract gender stereotyping of brass instruments.

The IWBC is a worldwide non-profit organization founded in 1990 by Susan Slaughter, one of the first women to hold a principal brass position in an American orchestra. Slaughter became a member of the St. Louis Symphony trumpet section in 1969 and was appointed principal trumpet in 1973.

Dr. Hersey was invited to perform at the first IWBC event at Washington University in St. Louis in 1993.

“This was a life-changing event for me to attend as a young professional, just starting out,” Hersey recalls, “I performed as part of an all-female military group which featured members from the U.S. Army, Air Force and Coast Guard. That conference opened my eyes to the high level of performance excellence, the camaraderie and warmth we experience in our field and the potential for growth we each possess as performers and educators.”

Dr. Hersey volunteered for the organization, serving as chair of the History and Awards Committee, and was appointed to the board of directors. She was elected IWBC President in 2016 and led record growth in membership and impact through strategic planning, marketing, and responsible stewardship of financial resources.